Due to popular demand I decided to start a small series of articles on using Adobe Illustrator and AI2ASS for typesetting, starting with this introductory post.

What is AI2ASS and why do I need it?

AI2ASS opens up the world of vector graphics to softsubbing by exporting vector drawings from Adobe Illustrator to ASS drawing commands. This greatly expands the possibilities of what you can do within the limitations of the ASS subtitle format, while simultaneously providing a user interface suitable for doing complex typesetting. Many of you have probably used AssDraw in the past, which technically also is a (crude) vector drawing program but offers only the most basic features exposed through a terrible GUI, making it essentially useless for any tasks that go beyond creating simple shapes. Within the past 2-3 years, both subtitle renderers and authoring tools have seen significant improvements, making complex typesetting that perfectly blends in with the background practical in many cases. At the same time, video quality of fansub releases is at an all-time high and you sure don’t want to ruin it with crude typesetting. It’s worth mentioning that AI2ASS is not the only tool of its kind. If you prefer a different workflow, competing solutions are available for Corel Draw and Inkscape, however I don’t have any experience with them.

This first part of the guide requires you to have installed:

Note that AI2ASS actually does work with AI versions as low as CS5 but this guide will make use of new features introduced in CC 17.1, so if you are stuck with an older version, you’re on your own.

This tutorial is aimed at typesetters, so you are expected to have firm grasp on typesetting with Aegisub. You don’t have to be an AI pro, however if you have never used a vector graphics program before, I recommend that you take a few minutes to familiarize yourself with AI prior to reading this guide (or maybe watch an introductory video).

It’s important to get some basic understanding of the possibilities, constraints and limitations of the whole progress, so here goes:

After you start AI for the first time, you want to customize the user interface to make the tools and facilities most important for typesetting tasks more visible. The specifics are ultimately down to your personal preference and you’ll figure out what you need as you go along, but there’s one thing you always want to be prominently visible: The Layers Panel. 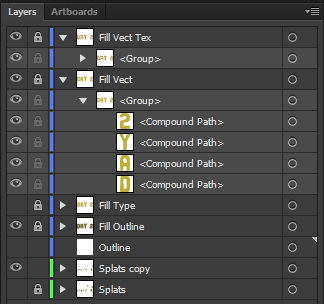 Layers in AI will become separate lines in the final ASS output, so it’s vital to always organize your layers properly or your ASS output will be confusing to work with in Aegisub (at best). The layers panel not only shows all layers, but basically the whole scenegraph - that means Sublayers, Groups, Compound Paths, Type and so on. Left to the layer or element names are the Lock and Hide checkboxes.

New elements start out unnamed and will only show their type name instead. As the sign you’re working on becomes more complex, the amount of layers increases and it becomes increasingly important to name them in order to not lose track of things. To do so, double click the label and type a descriptive name. Another Panel you always want to keep visible is the Pathfinders palette, because you are going to use them a lot. Just for reference, this is my AI workspace:

Now that we have our environment set up, it’s time to typeset something. For simplicity’s sake we’ll start out with an ordinary mask. To be able to do so, we’re going to need the video to be the background of our canvas. But since AI doesn’t support video, we’ll have to make do with a single frame.

I originally didn’t plan on doing an AI tutorial because there’s plenty of those on the internet, but since I know you guys are lazy, I’m giving you a brief rundown of the most important tools for typesetting-related tasks.

There is also a bunch of shortcuts worth remembering as they can speed up your work a lot:

Example 1: Getting Down and Dirty with masks

Now that you know about the essential tools, practice using them to mask all the speech bubbles on our sample. Mask the whole bubbles (not just the text) and be reasonably precise as we don’t want them to contain random spots of grain. I’ll spare you the walkthrough and just give you a few hints: 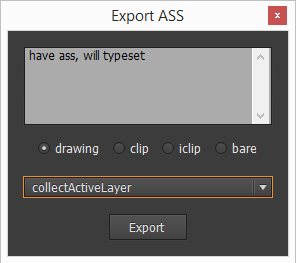 The exporting procedure is fairly straightforward. The export dialog can export vectors as complete drawings, \(i)clips or bare drawing commands and offers 4 modes of operation:

For our mask example set the mode to collectAllLayers and export the vectors as drawings. AI2ASS will run the conversion and output the results in the edit box at the top of the window - ready to be copied to the clipboard. Paste the result into the Aegisub subtitle grid (NOT into the subtitle edit box!), set the start time and check the result. You should notice 2 things:

OK, so far so good, but we could’ve also just created the mask in Aegisub by using the vector clip tools (albeit in a less convenient manner), so what can you do in AI that you can’t achieve with just Aegisub?

Here’s a non-exhaustive list of tools I used to achieve certain effects in signs I had to do so far:

Back to our speech bubbles, we noticed that together with the Japanese text we also removed some grain. Now we’re going to add it back.

1.Download this grain texture and open it in Illustrator. There are various ways of creating compatible textures. In this case it was taken from a raster image that has been preprocessed in Photoshop and then traced in AI, but the specifics are outside of the scope of this guide. Since you’re going to use the texture as a mask, you want the texture to be either black (0% transparency) and white (100% transparency) or grayscale with as few different shades as possible. Textures tend to add a lot of additional anchors to your signs and you will run into performance issues if you go overboard. More grayscale shades translate into more different shades of color which in turn increase the anchor and final line count. For this sign a single layer of texture is totally sufficient, and yet I still had to disable the grain layer for the final release because not even xy-vsfilter could \move this sign without lagging like shit even on a i7-4770K machine.

Now that we know which tool to use to convert our textured bubbles into pure vectors, let’s finish this up:

This would be a good point to wrap up this introductory guide on typesetting with Illustrator and AI2ASS, but unfortunately, there’s one more lesson to be had.

Our last Example deals with typesetting this scene and we’re going to work on this frame:

What’s so special about this text that we can’t do in Aegisub? We don’t want rounded borders, that’s all. So let’s dig out a nice gothic font and get started (I’m going to use Basic Gothic Pro).

If you made it this far and followed along with the examples you should be ready to do your own typesetting using Illustrator and AI2ASS and discover new ways to solve problems that are hard to tackle using Aegisub only. Please do comment if you have an item to add to the “Useful AI Tools and Applications for Typesetters” and don’t hesitate to ask if you have a problem (unless it’s a generic AI question that can be easily solved with a Google search). Also please point out errors of any kind and solutions better/faster/simpler than the ones presented here. I’m actually quite far from an Illustrator professional, so please take anything I wrote with a grain of salt. I’m also willing to take suggestions for upcoming blog posts. I already have an idea about the contents, but I’m pretty indifferent to the order I’ll write them in. Finally, here’s a little disclaimer in case the tone of this post has rubbed some dinosaurs the wrong way: I’m not advocating to entirely replace typesetting in Aegisub with doing it all in AI, because that would be silly, inefficient and would make scripts a lot less accessible for other typesetters fixing signs in the future (e.g. for BD releases). You can easily modify override tags, but changing drawing commands is simply not practical. Before I decide on whether to do a sign with AI I ask myself “Can I do the same thing with equally good results in a reasonable time frame (in less than twice the time it takes to do in AI) using only Aegisub?”. Thanks to unanimated’s and lyger’s automation scripts the answer is mostly “Yes!”. However, as the complexity of our typesetting increases, the odds are rapidly shifting towards software that offers both the features and, more importantly, fitting user interfaces to accommodate those needs. Take note that “higher complexity” only translates into “better signs” when in the hand of someone with both basic and advanced typesetting skills. tl;dr don’t start out with this guide when you’re new to typesetting (start here instead).